Goopy, goopy Glue where are you? We've got some work to do now ...

Are you humming the Scoobie Doo theme song yet? If not look at the post title again ... ha gotcha! It is a wonder I can even type this without sticking to the keyboard for I, dear friends, have broken out that goop known as Araldite. Not for the feint hearted this stuff - oh no and since I decided to to do some EXTREME gluing, I chose the quick-set version! It is a really messy enterprise and probably best not done in front of the telly. It also pongs! However, by tomorrow I will have some nice new components to play with so it was all worth it. So, I hear you asking what drove me to this extreme gluing? Well, I am a sucker for a good cabachon - just love 'em and have collected a few vintage ones here and there as well as some dodgy modern cameos - which I also love. Tonight I decided to "seat" some because really, how long can I go on just admiring them rather than using them? Yonks ago I found some strange settings in an oppie and I rediscovered them tonight and made a lovely new component that will hopefully become part of a necklace very soon. 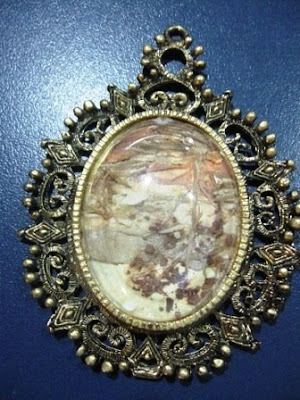 This is the op shop setting - it has a picture made from bark inside it but it has deteriorated. I got three of these and they were a necklace which is mad because they are large and weigh a ton! So, this is the "before" shot. 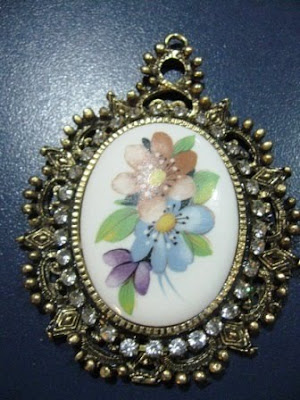 And this is the "after" shot. I have pulled everything out, cleaned it up and set a vintage cabachon in there instead. Then for a little bit of sparkle I added some Swarovski crystals around the edge. I think it is pretty but it is also heavy so I will have to be careful how I string it! 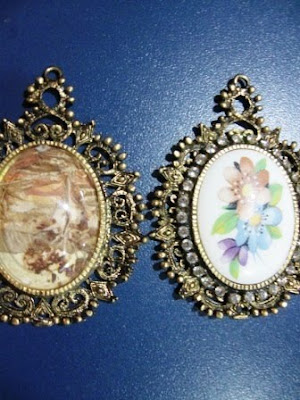 Side by side - what a difference hey?!

Since I had the goopy glue out and already all over the place I fitted up some of those dodgy modern cameos I mentioned earlier. 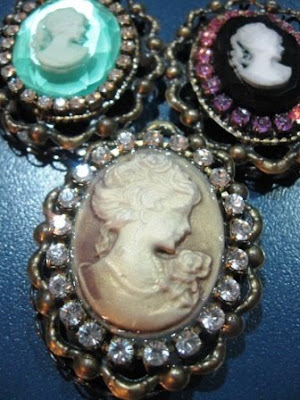 The glue wasn't quite dry when I took the photos! Nothing at all vintage about these except the way they look I'm afraid, Still, they have come up a treat and I am hoping to be all inspired tomorrow and make them into something lovely. First I have to get some of the glue off my fingers and I do believe I have stuck the pocket of my trackie daks closed!
Posted by sue at 1.6.10

Hi Sooz,
I love the pendants you made and glad you overcame the smell of araldite. Just found your link to your blog and reading it now! Am loving your creations, and writing, especialy the spoon and terms for op shops. Would love to catch up at some stage, I was in the Barossa today.