It has been a month or more since my beads have spoken to me and beckoned me to come and play. This wouldn't be a problem if money grew on trees and electricity and food were free. They aren't. Last night I did  the grown-up thing and sat myself down at the beady table and said sternly "Work!"
I had an idea for an epic, exotic bib-style neckpiece. What I ended up with was an epic fail. 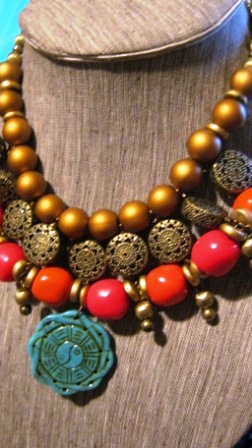 Ugh -it is heavy and clunky and no matter how I tweaked it, the beads would not fall nicely. It was destined to be one of those necklaces that you fiddle with when you wear it because it twists about - no, no - just not good enough. I left it overnight hoping that by morning it would miraculously appear to be the perfect necklace. 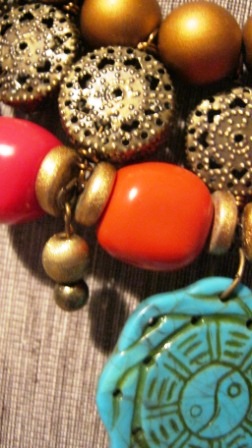 No significant changes were evident this morning -jumprings not closed properly and beads just refusing to play along nicely ... there was only one thing for it ... 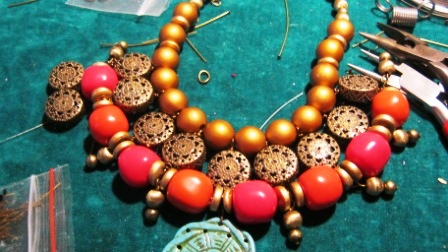 It needed to get the big chop - I loathe remaking things but it was clear that this piece was going nowhere fast. 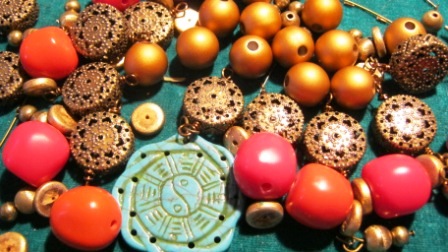 Chopped up and ready to re-string ... 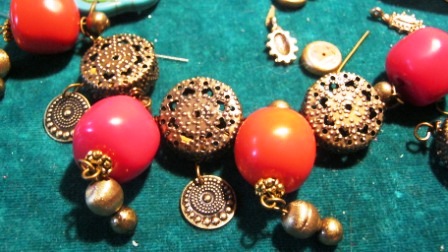 OMG - the second attempt was even worse than the first! Bletch! I was beginning to hate these beads ... 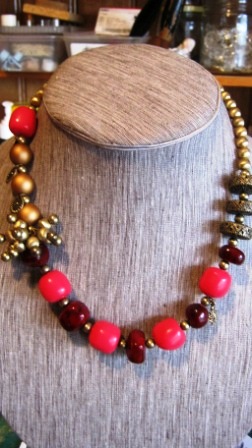 However, Round 3 gave me a simplified and far more wearable design and although it is well removed from an exotic, epic bib, I am pleased with its elegance. 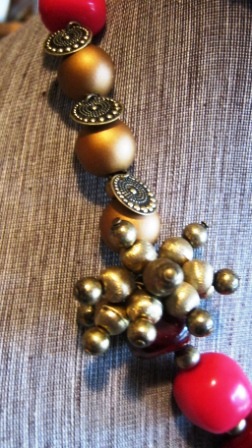 It has a few exotic touches like the belly-dancer coins and the bauble that jiggles about - hhmmm maybe one shouldn't use 'belly-dancer' and 'jiggle' in the same sentence? In the end all the piece really needed was a change of colour, style and concept. Oh and a complete reworking - meh - bib necklaces are over-rated anyway!
Posted by sue at 12.2.11

Oh Sue, that has happened to me more than once, things just won't lay right and I end up going back to a single strand convincing myself that I was just getting to fancy or crazy with my design. i once had a button necklace that INSISTED on flipping even though I designed it one way. it's funny how some things just don't work at all and folks think that stringing is so easy. Well we learn a lot in our process don't we?
xoxo Kim
( P.S .still wearing the earrings and getting compliments in my travels across the states)

What a learning experience! Re jigged looks much nicer. Jewellers are lucky- we can rip it all apart.