I had a fun stroll around a local oppie on Saturday - I haven't been for ages and it was good to see lots of new thngs had arrived since my last visit. 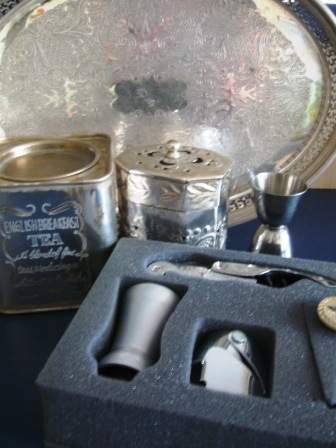 Bearing in mind that Christmas and the obligatory, celebratory cocktails that go with it, is just around the corner, I was dead chuffed to find a little jigger thingamy - no more using the medicine glass to measure out accurate shots. Mind you as the day progresses accuracy goes out the window but at least we can start off with a little class! The set was apparently part of "The Corporate Collection" (according to its label anyways!) and there is a handy champagne sealer, a wine stopper and what appears to be a bit of a dodgy "waiters friend". All quite useful and for the grand sum of one dollar, much too tempting to resist. I found some silverware that will eventually be cut up for jewellery although the tea tin is rather intriguing. 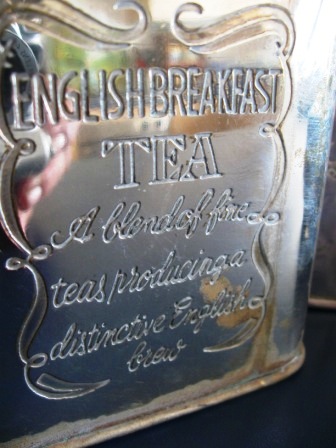 It is really heavy - definitely NOT tin but rather some kind of silverware. It is a facsimile of a tea tin really and I wonder if it was for some kind of comemeration - there are no dates engraved on it though. Perhaps it is someones metalwork project? Part of an engravers training? It has me stumped and I would love to know what you think. The score of the day has to be awarded to a bunch of old LP's. I resurrected my record player recently and so I was looking to add to my collection. 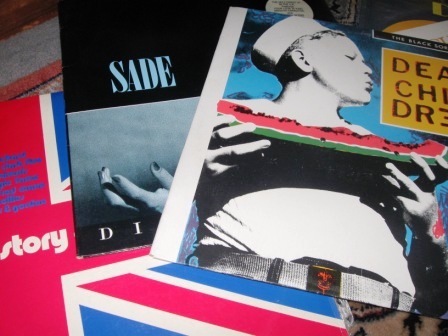 This lot include some British pop music (Manfred Mann, Dave Clark Five, The Hollies etc), the very lovely Sade, The Black Sorrows and believe it or not a Patsy Cline album. 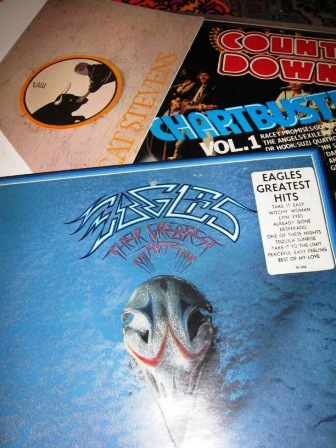 What record collection would be complete without The Eagles Greatest Hits? As a child of the 70's I had to have Mr Stevens and those compilation albums featuring such greats as Disco-Tex & The Sex-O-Lettes (Get Dancin"), Sherbet, and Kraftwerk. I also picked up an old looking LP that is sung in French. I thought I could play it when I am cooking and get in touch with my inner Julia Child. Hope it works for curries! I spent all of Saturday afternoon spinning my discs and inflicting a "proper" musical education on the younger members of the household!
To see what everyone has hunted up in the oppies this week, head over to Sophie's.
And just in case there are holes in your own musical education or you simply want to stroll down memory lane, let me just share this little gem from "Whopper Original Smash Hits" 1975 - "The Hustle" by Van McCoy. Oh yeah - I challenge you to sit still!

Not sure if this will take off on "So You Think You Can Dance"! but you gotta love the cheesiness! No wonder feminism took off!

And if you want to know a little more about the phenomena, watch this!

I wish I still had my record player, did you enjoy listening to your LP's? Thanks for bringing back music memories.♥

Oh dear!
Yes I know all of those old favourites too!

Thank you Paulette - I had a great afternoon revisiting all those "golden oldies!"

Christina we are clearly of the same vintage!

that tea canister is delightful. it seems like a lovely little find and you are very resourceful being able to turn old silverware into jewelery!