Sometimes having a long lead time on things can be deadly! Case in point is a book collaboration a small group of printmakers and poets have been working on - it seemed we had ages until final images were due so that the book could be collated and then suddenly, the due date is NOW! Yikes! We needed to create an edition of 18 prints in response to the poem presented to us. So you have a bunch of emerging printmakers and a bunch of emerging writers all in one room - sounds like a recipe for disaster but I think everyone came through relatively unscathed. Overall, the theme of the book is about metamporphasis. The poem I was assigned was about a journey, transitioning from country to city - well that's it loosely anyway! So here are the prints - 18 caustic etch lino prints that have been hand coloured. Who knew hand-colouring could take so long - I am talking HOURS here! Still, I loved using this method to create an image - very loosey-goosey and kinda "organic"!
I measured the paper incorrectly so these are printed with dodgy borders which had to be taken care of post-colouring! 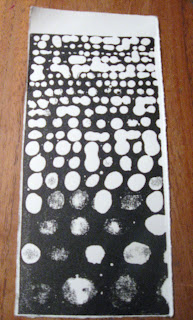 The caustic has etched at different depths and I like the less defined effect that the shallow etching creates. 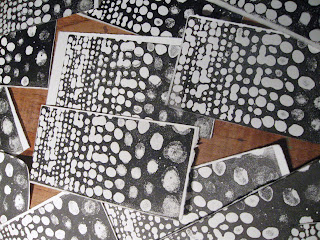 Aarrggh! So many dots! I had no idea watercolours could be so unco-operative! 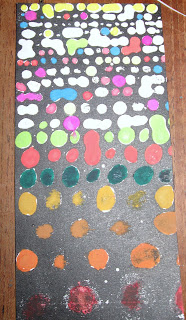 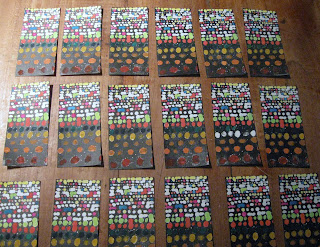 Satisfying to see them all in a row though!

Glad to have it all finished and am excited to see the final book - unfortunately I can't be there to help with the collating and making of the book but all that is in good hands so I will just have to be patient!
Posted by sue at 8.9.09

Looks very therapeutic with all those dots!