In an effort to get motivated to do some work I have embarked on a MAJOR studio clean-up! I quite often have a tidy up before I get started on new projects but this time a little clean-up just didn't do the trick. It started with the beads... I asked my menfolk to apply their lateral blokey brains to the problem and they unanimously agreed that what I really needed was those divided boxes - the kind embroiderers store their floss in or fisherman put tackle in. Originally my beadies were stored in little zip-lock bags, sorted into colours and stacked into cutlery trays which were housed ina special shelving unit the hubby designed and built. This was a great solution until the collection just got too big - I spent half my time hunting through the trays and the rest picking up fallen baggies from the floor 'cos the trays were overstuffed! I decided to take the good advice offered and started with 50 boxes ... Two days and a crippled thumb later I have finally transferred the last bead to its rightful place! I have sorted and sorted,labelled and stacked! I even culled - ALOT! Of course this new system is going to require a new shelving unit so hubby is getting to work on the design - which naturally will not fit in the space previously used to house the beads - hence further sorting and culling to rearrange the space. I am certain it will be GREAT once it is finished but it has been a Herculian task and I will be very glad to be finished! Hopefully it will spur me on to get into making mode for the next couple of things coming up - then again maybe I deserve a day or two off ... 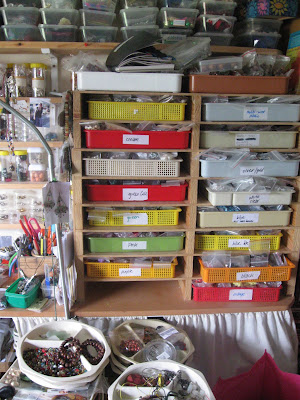 The Original storage system - getting out of control!
and
the sorting begins ... 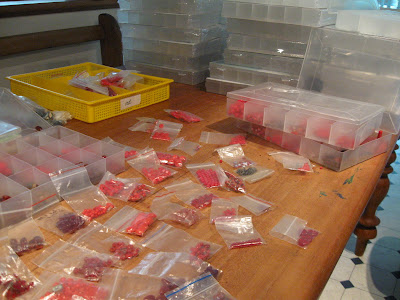 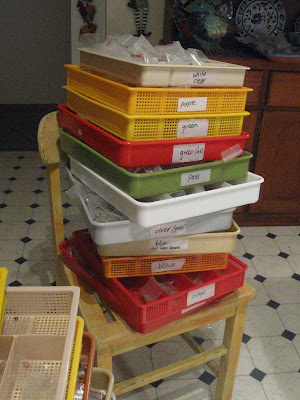 A whole lot of RUBBISH! That is just empty baggies and packaging from the boxes! 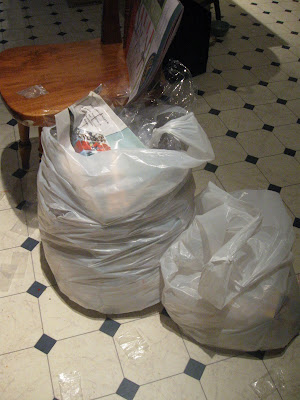 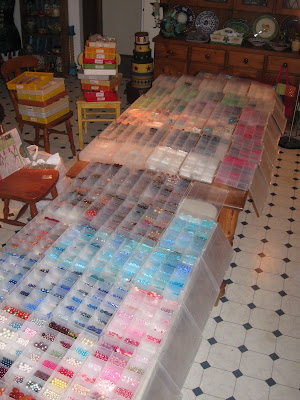 Finally it starts to look orderly ...
and then
all neatly stacked awaiting new shelf! 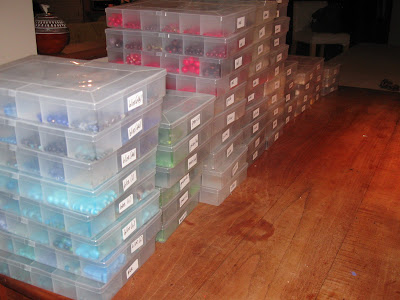 Do you rent yourself out for doing tidyups?
It looks so good and I love the photo of your new boxes all filled with beads and open on the table. Pity you couldn't just put a piece of glass over the top so that you could still see the beads like that!

What Rustic T said, Sooz, my eyes welled up with tears of envy at that sight. You are a braver woman than I ever will be, at some stage I know I have to actually GO IN and do a Sooz-action. but not now. It is spring and the juices are boiling. Have you ever been in Saldechin, they have those gorgeous display cabinets in white. I want one. Or two. It has drawers, it has room for necks, it has room for the silks and the wools. But maybe not for me :(.