Here is another exhibition piece that has gone to a new home. I am posting it here because I had a comment from the pair over at Woolfenbell about using china to make jewellery. This piece started life as a promotional mug for our daily newspaper "The Advertiser" ( can you believe we only have one daily?!). I found it all lost and alone in the thrift store and was immediately attracted to it because it was covered in text. When I discovered that text was in fact snippets from newspaper reports I was over the moon! I cut it up as carefully as a gem cutter might approach the Hope Diamond - to me it was just as precious and I really wanted to maximise the amount of text I could use. Then each piece was shaped and drilled. I decided to create a metal disc with the words "seek truth" stamped on it because I think it would be rather nifty if our newspapers did just that! I called the piece "Ready Rupert" - a reference to the owner of "The Advertiser" ( and a whole chunk of Australian media!), kind of as a plea to the man to allow his journalists to actively seek the truth without regard to who he favours, be they advertisers or political parties. Jewellery as a political statement? Hells yeah! Why not?! 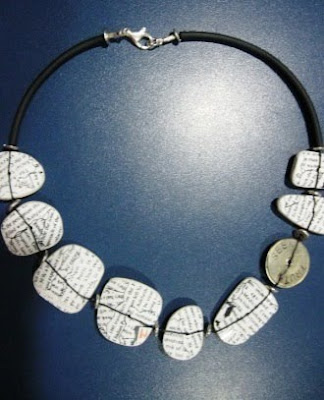 The piece is designed to sit quite flat on the collar bone. 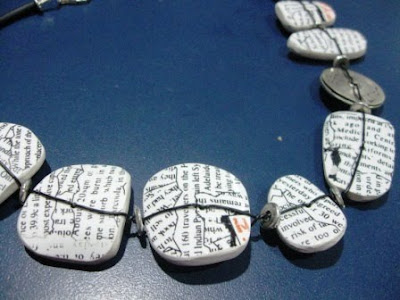 The text looks like little bits of torn newspaper. 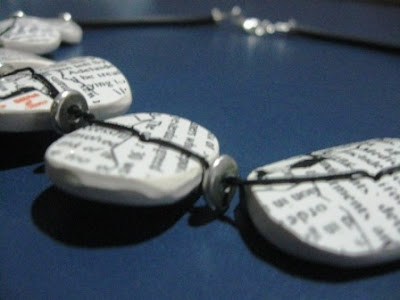 Each piece is woven together with wire. 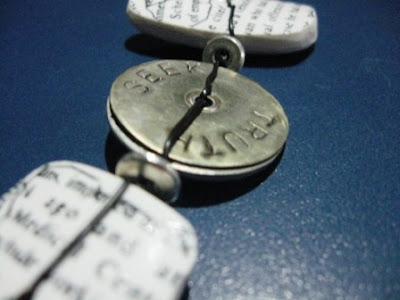 The double-sided disc - made from an old tray and stamped with "seek truth".
Posted by sue at 2.9.10

What a great piece, I love anything with text on it. And such nice rounded edges ( :

Jewellery as political statement- I double that hell yeah!