Thought I would share a few piccies of the decorated Hall. We had some most marvelous bunting from Melissa - all made from vintage sheets, doileys and lace. Draping it across the ceiling proved to be quite an adventure as Kath and I had no ladder and we are both somewhat vertically challenged. If I ever caught my kids clambering up a stack of nine chairs waving a massive broom, I would have a hissy fit - but that is exactly what we did! It took several attempts ( and there were a few "Teena Lady" moments let me tell you!) but we got there in the end! The bright bunting (that was easy to hang!) had been made years ago for my nieces wedding and has subsequently been used for quite a few parties. The panne velvet cloths were also made for my nieces wedding and are usually employed to display jewellery upon. The lace cloths were dyed by me - prolly NOT gonna go there again - and you have all met the table decorations (footed tea-pots) before.
I don't have any shots of Melissa's bunting at the hall just yet so I took these to give you an idea of the trouble she went to. Just a few pieces of the 13 or so meters Melissa made! 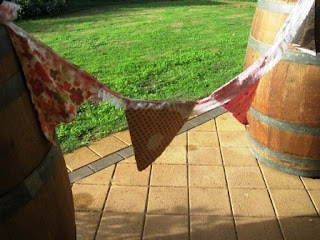 Just had to show you how great it looks when it is hanging. 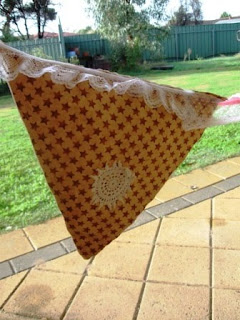 How cute is that little piece of doiley?! 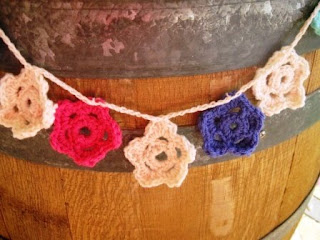 And of course the beautiful crocheted garland - what a gal! 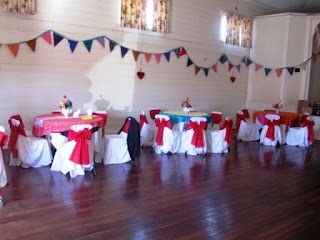 Here is the hall decked out - we only had a few tables the idea was to encourage people to mingle - given the exciting party games, they had no choice really! 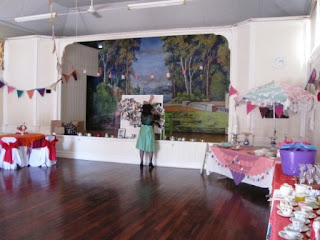 The photo board taking shape! Thanks Kath! Ooooh - see all the little tea pots across the front of the stage? They were from Melissa's collection and she gave at least one away on the day and I have the rest - planning something fun ... 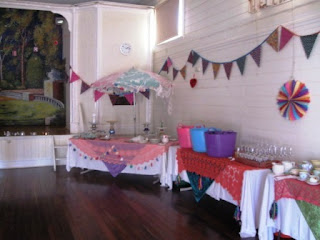 The other side of the hall - food, bar and tea station! 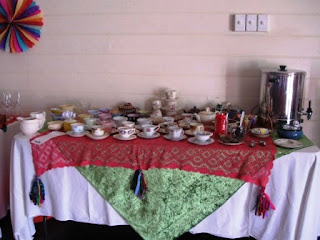 Can you believe all those tea cups are mine?! Some I have had since the kids were really little when we would ahve afternoon tea parties on a regular basis! Truth be told, that isn't the entire collection - just what would fit! 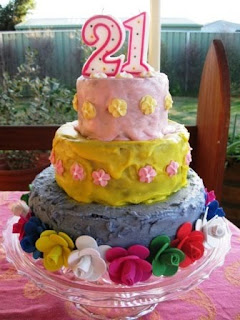 Even the birthday cake was handmade - dodgy icing and all! I really take my hat off to people who can ICE! Damn tricky if you ask me! I had to make a mad dash to the cheap shop to find something to disguise my lack of expertise - those flowers around the bottom are not edible - they are neoprene and hide a multitude of icing sins! On the day we also had a good few sparklers to divert the eye - give 'em the old razzle dazzle ...
Oh my goodness it was a lot of fun and made all the more special because my dear friends contributed so much - not just to the organising - baking and decorating but they gave their whole-hearted love, brought along their sense of fun and showed the depth of their friendship by making this a very special occasion - my daughter is still receiving texts from her pals exclaiming how much fun they had. Thanks you two - you are the BEST!
Posted by sue at 5.5.10

The hall looks so gorgeous, you all did a fantastic job!

You all did a wonderful job - a birthday to remember.
Your comments re the cake made me laugh, I always cover mishaps with flowers or chocolate leaves.

What a GREAT day. Fun was had by all by all and fun was had by all. My feet have only just recovered! And, who knew!! All those guys and gals were happy to get involved in every game which made it SO VERY wonderful.XXKath.