She likes me - she really likes me!

Hey guess what? I scored a little blog lovin', that's what! My Vintage Vow has been kind enough (and cool enough - hee hee!) to give me this little award.

Thank you so much! Like Gracie Hart in Miss Congeniality I am brushing up on my acceptance speech and practicing my wave!
Posted by sue at 15.1.12 1 comment:

Since my cuttlefish casting adventure meant that I had all the necessary casting equipment to hand, I decided to make some new silicone molds and cast some new jewellery components. 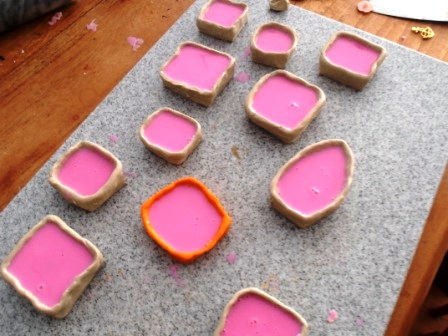 I used up the last of the compound I had which is good because it was approaching the end of its after-the-bottle-is-open shelf-life. I had varying degrees of success this time around - some casts were brilliant and others - well not quite up to scratch! I was particularly pleased though with how this one turned out ... 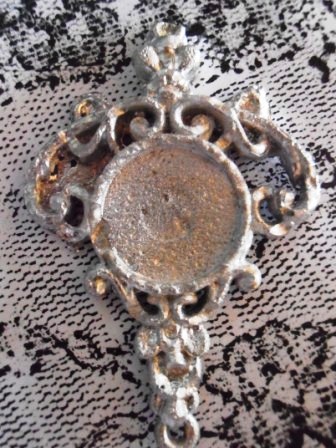 It has a rather Victorian look about it. 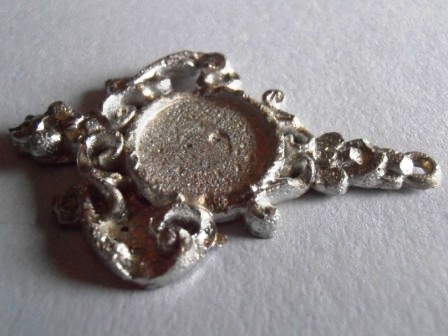 At this point, it has had a minor tidy up - removing overflow from the edges. Notice how rough and bubbly it is? That is because the mold is new - a few more pours will "cure" it further but hopefully it will retain some of that roughness because I really like it! 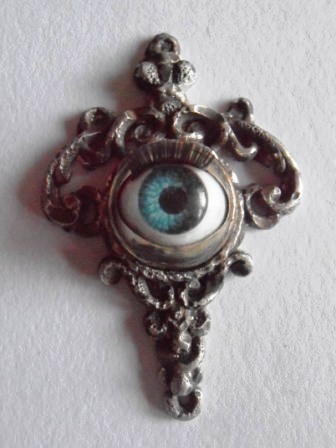 Here it is with a patina and an eye added! 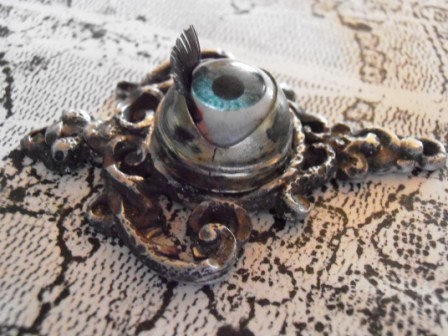 It looks old and crusty - just the way I had hoped it would look!  I love to work with found objects but I have come to realise that many of the things I like to work with repeatedly are, like embroidered doileys, quickly becoming a finite resource! So, I have decided to cast some things from objects I find and hence be able to use them more than once in my work. I think it will simply add another dimension to the work - and besides it will be heaps of fun! Here is the first of my "Faux Found Objects" 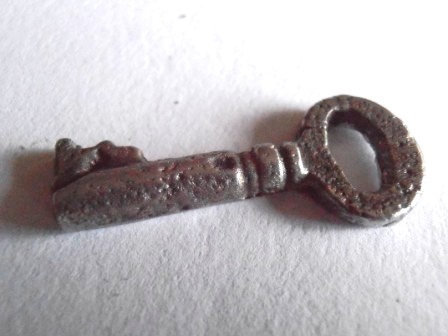 This has been cast from a very sweet little key that is earmarked for use with a layered pendant I created the other week. It is a great size and shape so I have recreated it using reclaimed pewter. I have cast it with a flat back which will give it plenty of applications. I guess nothing could ever replace the truly found object but I think these reproductions will have their own aesthetic - on their own or combined with originals.At the very least, it is a more useful object than the beer mug it used to be! 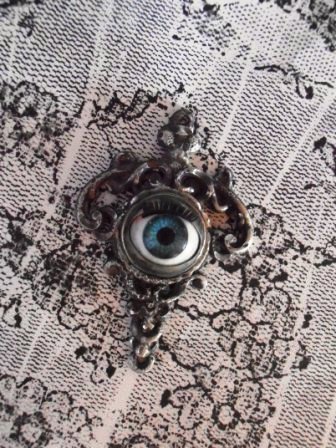 Here's looking at ya -  ha ha ha - get it? there is an eye - and it's lookin' at you ..?  Well I thought it was frickin' hilarious but you may feel it only warrants a wry chuckle of amusement - either at my comedic delusions or the pun - I'm not fussed - at least I will have made you smile!
Posted by sue at 13.1.12 3 comments:

I wasn't really a castaway - although I could probably handle being castaway on this beach ... 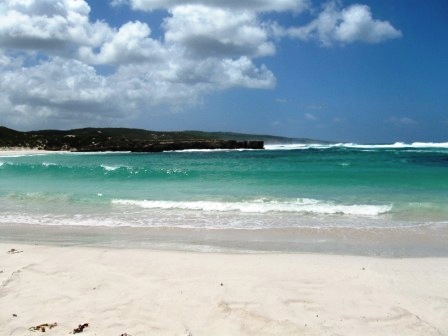 I was in fact visiting my friend Audrey and we decided to try our hand at cuttlefish casting. A bracing walk along this beautiful beach yielded some fabulous cuttlefish "bones" and we had a lovely time collecting them and then carving them. We had varying degrees of success but given that neither of us knew much about it, we did ok. We learned a lot from our mistakes! We did have the good fortune to catch up with Fred Peters who very generously shared some hints and tips and thus encouraged I decided to have another go at home today. First I had to hunt up some cuttlefish. Luckily (since there is not a beach within cooee of where I live), I had some that I collected with friends some time ago, on the Yorke Peninsula. 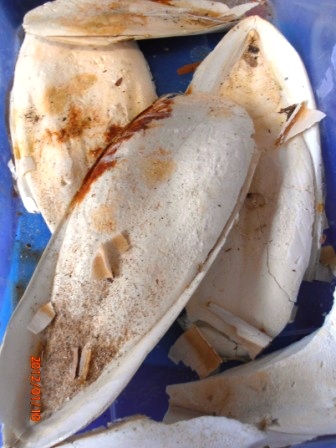 Next they need to be trimmed and shaped ... 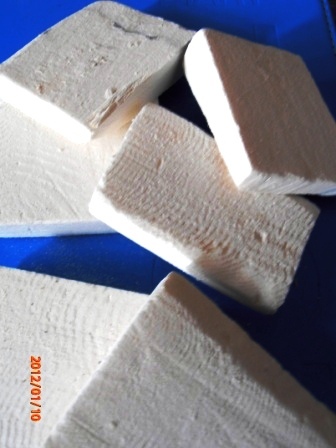 I found the carving the trickiest part - you have to flip your brain around and remember that the negative space you create becomes the positive space of the object you cast. Arrgghh! 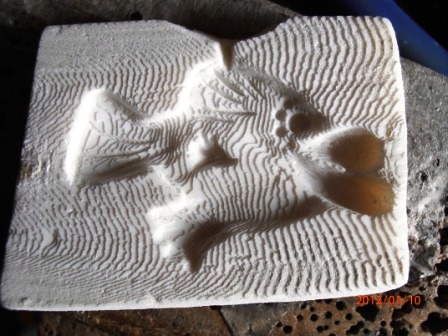 I carved a prettty simple (and rather odd looking!) fish. The cuttlefish is bound to a backing board (or another piece of cuttlefish) and the molten material is poured in through that vent that you can see at the top of the carving. 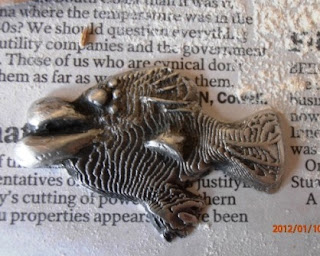 And here she is! I told you she was a bit funny looking! I am garnering a better understanding of the process so I remain hopeful that future attempts are just gonna get better and better! I think it might be a goodly while before I am up to this standard though ... 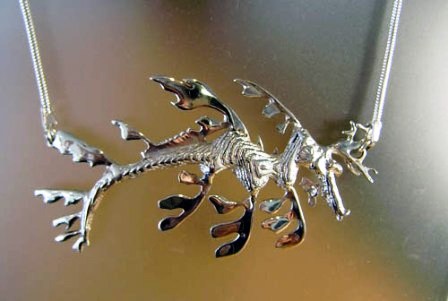 Given that my daughters birthday is just three and a half weeks away it is a good thing that we finally ot organised and made invitations to the party! The party is having a dress-up theme - fairytales so Ellen designed the invite around one of her favourite fairytale characters - Red Riding Hood. 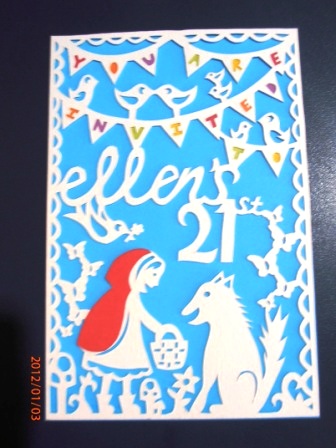 Firstly she designed and made a papercut which is really great but no way was she going to cut 50 of them! So, she bravely handed it over to her Ma and I had a bit of a play in Photoshop ... 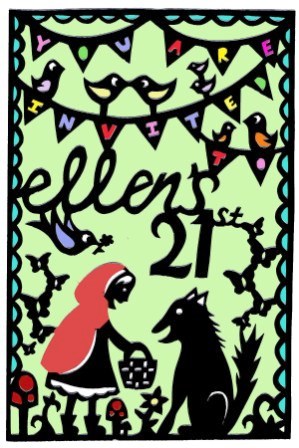 Ta dah!!!
I had a lot of fun messing about with different colours and in the end this is what we settled on. We have had the image printed off as photos which have been attached to cards ... 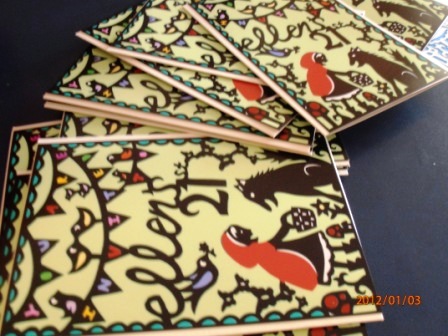 All that remains is to write in them and get them in the post! Hoorah! I am starting to feel excited about the party now and trying to come up with some neat table decos .... All ideas gratefully received!
Posted by sue at 3.1.12 3 comments:

Really it has just been far too hot here to think, let alone undertake any creative work! Nonetheless, this morning my fingers were itching to be busy so I sat at my bench and collected a few bits and pieces together ... 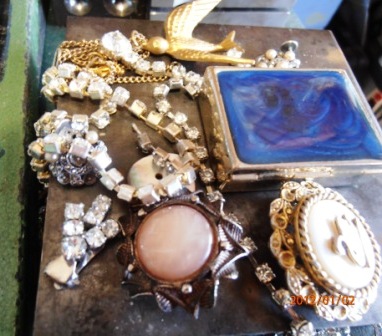 I didn't have a plan - I just thought it might be fun to practice some cold connections and join some stuff together. In the end, I settled on making something with the little hinged box with the blue front. 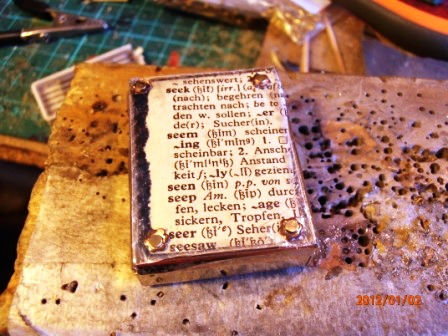 I wasn't really loving that blue front so my first step was to disguise it behind some text from a dictionary which I covered with mica to make it durable. 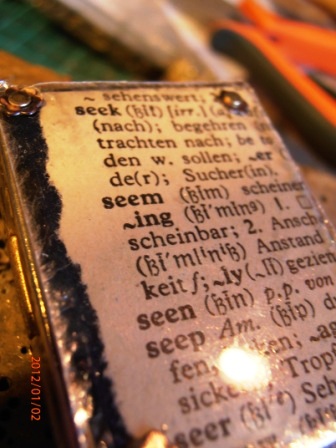 That looks better - right? By this stage I had settled on making a pendant box - maybe something of a treasure box? Or a place to keep wishes? Next step - decoration! 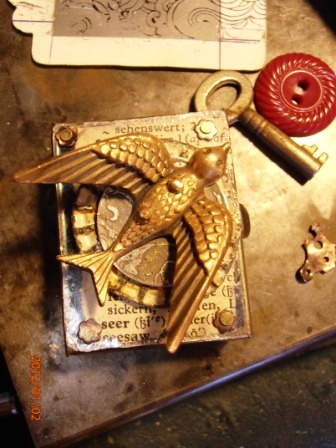 Amongst the bits I had fished out was a squished bottle cap and this lovely brass bird - it was a necklace from an oppie. I also added a layer of etched pewter and then rivettted it all to the box lid. I think the key pictured here will dangle from the bottom of the box and I will make a bead chain to hang the pendant from. In the end my studio just got too hot and I had to call it quits but it was a fun play while it lasted. Sometimes it is good to come back to a project later because you see it with fresh eyes and make creative choices you might otherwise have forgone. We'll see. I'll keep you posted ....
Posted by sue at 2.1.12 3 comments: