Blogtoberfest (Day5)
I recently purchased a few nice mags from an op shop - the kind I don't normally buy on account of they are usually expensive and secondly because they generally make me feel inadequate! I like the photography though - and am always amazed at how beautiful the food looks in the culinary ones. I decided to have  a go at one of the recipes in 'Gourmet Traveller' March 2001 - I mean who could resist making Cinnamon Almond Macaroons when they look this good ... 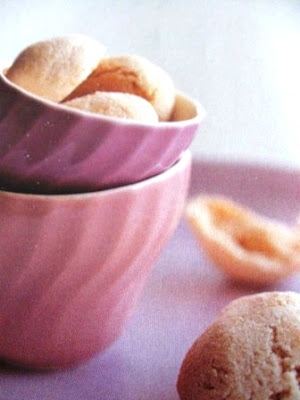 Yummy right? And they don't look too complicated do they? Well the recipe is in actual fact pretty straight forward but they are a bit time consuming - lots of beating and adding sugar gradually - think this is probably crucial and could be a factor pertaining to the appearance of my version ... 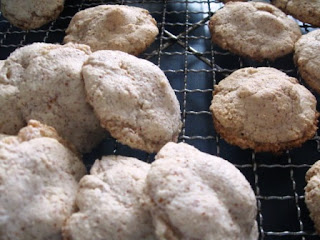 Oh dear! No where nears as lovely to behold as those gently rounded mounds of yumminess featured in the magazine.They taste great which is some compensation but I would have liked them to look just as good as they taste!

Combine almonds, cinnamon and flour in small bowl. Whisk egg whites until stiff peaks form - use electric mixer if you can. Add sugar 1 tablespoon at a time and beat well to dissolve after each addition. Beat until smooth and glossy then fold into almond mixture. Roll heaped teaspoons of mix into balls (flour hands lightly!) and place on lined trays - approx 4cms apart. Bake 180C for 10 mins then swap trays around and bake further 4 mins. I think it is best to keep an eye on them though! Alow to cool on trays a bit before transferring to wire rack.
Apparently these will keep in an airtight container for up to 2 weeks - yeah, well good luck with that - they are too delicious and very moorish!
Posted by sue at 5.10.10

gah i've always been to scared to make macaroons... maybe i'll try these ones :D

As long as they tasted good that is the main thing.....I've heard macaroons are one of the hardest things to make look good. x

They would be delish - love cinnamony things.