A few years ago I was fortunate enough to attend an art retreat and take some classes with the most marvelous Susan Leanart-Kazmer. I had been a fan for quite some time so it was a really big deal just to meet her let alone suck up all the knowledge and skills she was very generous with. At the time Ice Resin was a relatively new product and fairly hard to source in Australia - now thank Heavens you can easily pop over to see Jen and get it! It is a really good product but I haven't experimented with it as much as I could have. Playing with resin can be pretty messy (at least when I do it!) so you need to set aside an appropriate space to work in and  - blah blah blah. No more excuses - I decided that I would dedicate a little time to this medium. First I made some bezels. I used copper pipe and soldered on jump rings. This is a pretty time consuming thing to do - especially when you consider the cost of pre-made bezels - they are fairly inexpensive really. Still, like soapmaking, at least I can say I did it. Here they are with the first layer of resin. My intention was to create double-sided charms using origami paper. 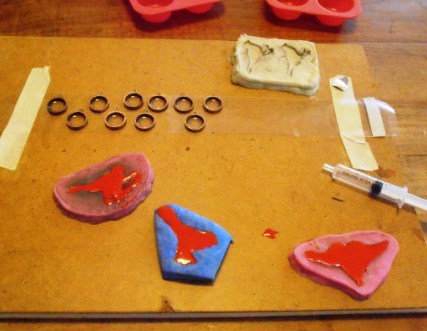 I had always thought the idea of making coloured resin sounded like a good idea. In the dim recesses of my mind I had some recollection of Susan mentioning oil paint to colour Ice Resin. Naturally I didn't bother to do a quick reccy on the Net - preferring instead to sally forth in my usual gung-ho fashion. I added rather a lot of oil paint in relation to the amount of resin which did result in a lovely opaque colour. 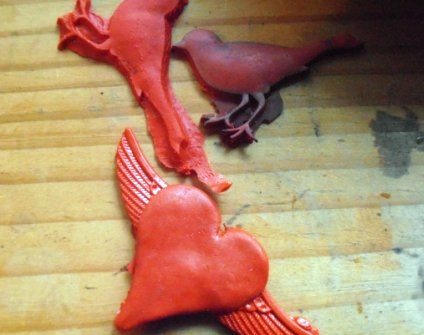 I used molds that I have made in the past for resin casting. 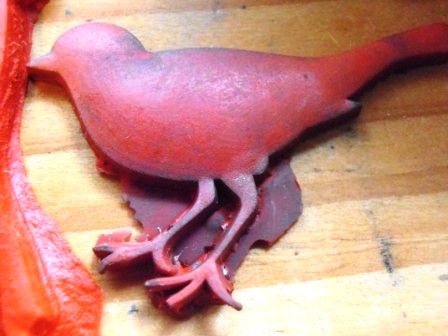 And if you don't clean them you get all this black stuff on your resin. I don't mind it though. The thing with these is that they are still after 3 days fairly flexible. Quite likely this is due to the addition of a sizeable dollop of oil paint. I will try it again with less and see what happens! 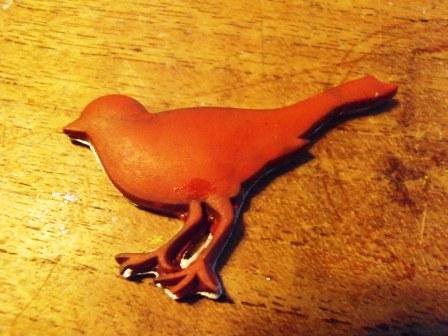 I hate to waste anything - even an experiment so I resined the little bird to some reclaimed metal and have cut it out so that I can make a brooch. 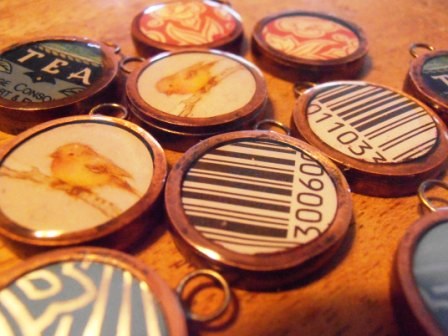 It turns out that I couldn't be arsed making double sided charms. Or using paper. You have to seal it both sides and I didn't have a paper punch the right size and apparently I am too lazy/wobbly to hand cut circles. I do however own a disc cutter so I used tin instead of paper. (don't judge me!) 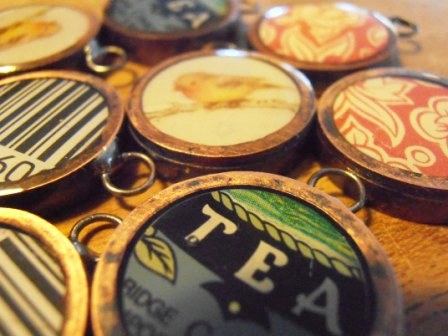 I have made pairs of these so they can readily be made into ear-rings. They seem to take awhile to make but that probably has more to do with waiting for the resin to cure than actual effort. I am planning another lot of random ones next - I might even use paper. Okay so I will need a paper punch first ...
Posted by sue at 18.9.12

WoW Sue these look great with the metal. I use the resin sometimes and it is a bit tedious, but I think it's worth the results, it just needs lots of stirring and when you think you've stirred enough, you have to keep going a bit more. A little like rolling felt.

I love these! The weird thing is - I am working on some resin pendants too - mine are made from old curtain rings... yours don't have blobs of resin all over the edges though. You are good!