After a long sewing drought I think choosing to make little projects is a smart idea. Since they are quick to make you get that almost instant gratification that comes from actually completing something! This is a little coin purse made of patterned denim from the op-shop and some Japanese-style cotton from the Quilting shop - leftover from a previous obsession with those little drawstring Cicada bags. I used a little wooden flower on the zipper-pull. I like it but overall I think it is a bit large so I might modify it. The other thing is a revamped camera case. My old camera case was bright red which made it easy to spot in the bottom of your handbag but it was made of that neoprene stuff and eventually it got just too grotty. Now, my camera is a bit old and a whole lot more chunky than newer digital cameras, so finding a replacement case has been bit of a challenge and forget finding a red one! Eventually I found a boring black one which, despite its less than glorious colour was perfect! I hacked off the front pocket, got out the hot- glue gun and covered it with a bit of this vintage fabric - which I have metres of and only ever seem to use in small amounts! I even found a scrap of ric-rac to complete the job. I love the way it looks - colourful and easily identifiable. Someone actually asked me the other day if it was from Bauhaus (upmarket gifty shop in Rundle Street). I love hot glue! 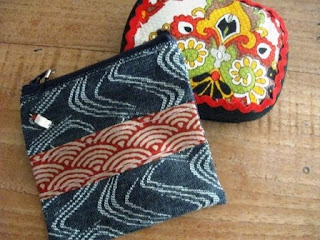 cute purse and I love the camera case